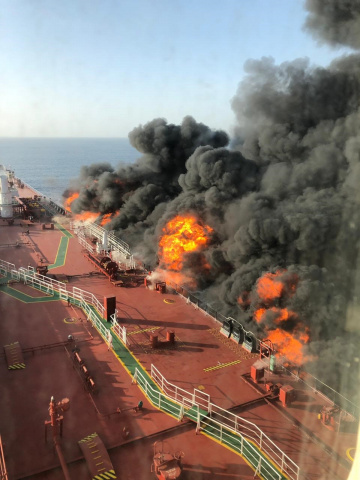 Latest updates on crew, ships and wider logistics and economic fallout following attacks in the Gulf of Oman that left two tankers crippled

The two tankers attacked in the Gulf of Oman are under tow to the UAE, while the United States has released videos it claims shows Iranian naval personal removing an un-exploded limpet mine from the hull of the ship.

The exact cause of the attacks on the Kokuka Courageous and Front Altair last week remain unknown with the US blaming Iran, and Iran saying the accusations are unfounded.

The vessel’s owner Kokuka Sangyo Co, Yutaka Katada, said at a press conference in Tokyo that the ship may have been hit with an airborne weapon. The US Navy says it received a distress call from the vessel at 7:00 on Thursday.

"The crew told us something came flying at the ship, and they found a hole. Then some crew witnessed the second shot." Katada said there was no possibility that the ship, carrying 25,000 tons of methanol, was hit by a torpedo, Reuters reported.

The 2010 built, 27,000 dwt chemical tanker was one of two vessels attacked in the Gulf of Oman on Thursday morning along with 2016-built Frontline aframax, Front Altair, forcing the crews of both vessels to evacuate.

Bernhard Schulte Shipmanagement (BSM) said the Kokuka Courageous was now undertow and headed towards Khor Fakkan having sustained damage to the vessel’s starboard side. The manager said the vessel was stable and there was no loss of cargo or danger of sinking.

The 21 crew of the Kokuka Courageous abandoned ship after the attack and were rescued by the US warship USS Bainbridge and the merchant vessel Coastal Ace which were in the vicinity.

The Front Altair was carrying naphtha, a petrol product, from the United Arab Emirates to Taiwan, while the Kokuka Courageous was carrying methanol from Saudi Arabia to Singapore.

According to global satellite monitoring company Iceye, the damage to the Front Altair caused some oil spill in the waters around the ship.

Front Altair crew members landed in Dubai on Saturday after two days in Iran. According to the US account of events, US naval forces in the region received distress calls from the Norwegian-owned Front Altair at 06:12.

It’s crew were rescued by the merchant vessel Hyundai Dubai before being transferred to an Iranian naval vessel, prior to be flown to the UAE on Saturday.

The attacks on the two tankers come less than a month after four tankers were ‘sabotaged’ in a similar fashion while at anchor off the coast of Fujairah.

This has sent tremors through oil markets and sparked fears of widespread disruption to the global oil trade, much of which passes through Gulf waters.

If the cost of transporting oil through the Strait of Hormuz becomes too expensive, or too danger, it represents a logistics nightmare for the global economy.

The US Energy Information Administration (EIA) calls the Strait the world’s worst “chokepoint”.

In addition to the video purportedly showing the Iranian Navy removing a limpet mine from the side of Kokuka Courageous, the United States has also accused Iran of attempting to shoot down a drone sent to investigate the distress calls on Thursday.

The US military said Iran fired a surface-to-air missile at the drone. Iran did not immediately respond to accusations of the attack on the drone, but has said it was not responsible for the attacks on the tankers.

The United Arab Emirates’ top diplomat said Saturday that his country has evidence that the attacks were “state-sponsored” but stopped short of blaming Iran.

Minister of State for Foreign Affairs Anwar Gargash called the attacks a dangerous escalation in the region. “Wisdom and collective responsibility are needed to prevent more escalation,” he said in a Twitter post.